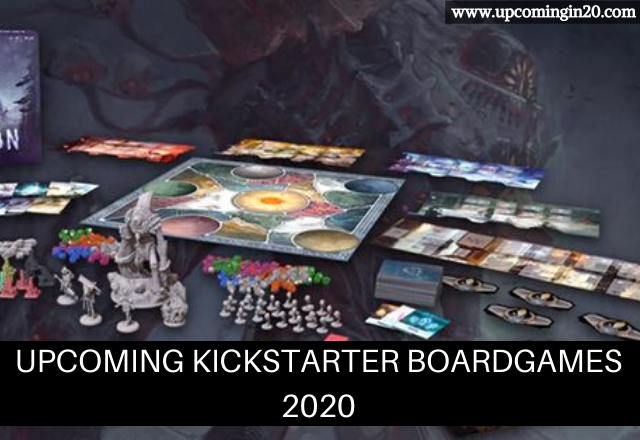 Since the launch, Kickstarter board games have got very popular among people. It is one of the best places to let people explore new and evolving tabletop games. Not just gaming enthusiasts and nerds, this platform is also extensively used by top gaming publications to determine hot new releases in games such as card games, tabletops games, board games, etc.

A majority of these popular titles are prevalent in nerd as well as mainstream culture and offer incredible rewards for pledges, and potentials for great adventure. So, here are a few upcoming anticipated board games that are all set to launch for Kickstarter in 2020.

This is a new game launched from the makers of “The seventh continent”. The game is likely to continue its gameplay concepts from “The 7th Continent”, along with an aim to reach new heights. This game will be no more connected to the older title, gamers will get to explore the new concept of dark fantasy.

This gameplay is expected to get enhanced by providing a different focus. Where the earlier series was based on “Explore” and “Survive”, the upcoming series will be based on “Explore” and “Build”. So, here the focus is more than building in place of survival. There is a little wait to know everything how innovative is 7th Continent going to be. Though looking at the success of earlier releases, people are expecting the new series to be equally mind blowing and interesting.

Dead Reckoning is a pretty new game illustrated by Ian O’Toole. This game is all set to get crowdfunded in 2020 and printed by AEG. Speculations about the game are that the author is planning to serve an adventurer themed game with substantial exploration.

Exploring unexplored waters and locating new territories will be a central gameplay element in the new launch. You will need to expand the ship and enhance the crew. The game will include card crafting with a feature of levelling them up. A system of sagas is also expected that allows unlocking expansions hidden inside the base game. This ultimately leads people to story evolution without any labels or breaching the parts. In the new release, an area control will be of prime significance with the fights with other crews.

CMON is releasing an updated version of its original Zombicide in 2020.  The new version is going to include several gameplay enhancements that were presented in Zombicide. There are going to be a minimum of twenty-five playable scenarios that will form a campaign and six new survivors who will have their own minis, and dashboards.

The newest release of this project is expected to be around somewhere in 2020. Though the game will be set in China, it will be a euro game with resource management, and worker placement.

You can see some unusual adventure themes and ideas in the new release by Awaken Realms. It is going to include a form of battle and several types of positive and negative player-based interaction. There is going to be a lot of hopes of high production and an excess of gameplay twists.

ISS Vanguard is another grand project by Awaken Realm. This campaign is all set for second and third quarter of 2020. ISS Vanguard is a game where players need to explore the space. This game will continue to put full focus on the adventuring part. Though there is going to be a level of combat, but it will not be fully combat oriented. In addition to battle, players will search for new planets to explore, and examine.

Now, the last kickstarter boardgame on our list is “The Last Saga”. It’s new version is predicted to get released in 2020. The past releases of this game have driven people crazy and the same is expected to be in the next year too. There will be deep stories, innovative ideas with a lot of high quality and lovely components. Players will be taken to the viking era. People in that area will dream of finding a mythical region of Valhalla where they can prosper for their whole life. Opening of a new territory uncovers mystery and restlessness than prosperity. Disappearance of crews creates a disturbance in the surroundings that makes it unwelcoming for people.

Players will need to solve the mystery of the vanished crew, discover the island and try to live there. This game is “semi-cooperative” where players do not play against one another but have secret objectives that translates to their triumph points.