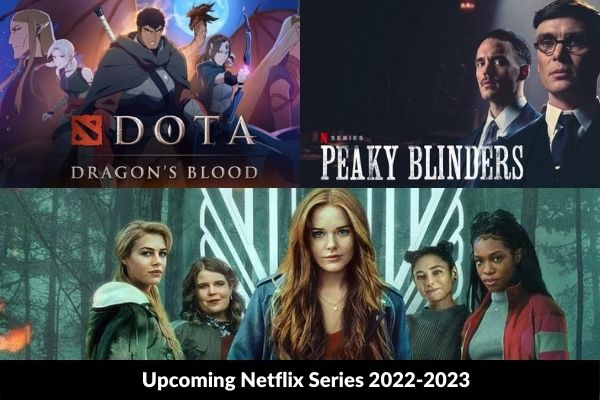 Netflix is a hub of series and shows of various genres and is the best friend of many individuals who are keen on watching the online content to entertain themselves. Well, be excited because Netflix has an incredibly different collection for its viewers for 2022 -2023 period. Have a look at the list below.

The release of the popular TV series season Fate: The Winx Saga Season 2 is expected to be in 2022. This show is a journey of five fairies who attend a magical boarding school, Alfea that is situated in the Otherworld. Here, they have a purpose of mastering their magical powers while they navigate love, rivalries, and the monsters that put a threat on their existence.

This show is about a gangster’s epic based around the exploitation of the Shelby Family in Birmingham during the turn of the century. Peaky Blinders is associated with a gangster family of Irish travelers who originated in England. The central part of the story is about a group of Peaky Blinders and their ambitions. The story takes a thrilling twist when a detective chief inspector Major Chester Campbell arrives to clean up the City from the Republic Army of Irish, sent by Winston Churchill from Belfast. This one of the most popular TV series is anticipated to be released in 2022.

This series is based on fantasy in which the DOTA2 universe tells the story of Davion, a prestigious Dragon Knight completely devoted to wiping the scourge from the face of the world. During his mission, he encounters a mighty ancient eldwurm as well as the noble Princess Mirana who is on a secret mission of her own. Davion feels so embroiled in some events that he could have ever imagined.

In this show, the audience will be whisked away to a crumbling medieval kingdom of Dreamland. Here, they will follow the misadventures of a hard-drinking young princess Bean along with her feisty elf companion Elfo and Lucy, her personal demon. During their adventures, the trio will confront trolls, ogres, harpies, sprites, imps, walruses, and lots of human fools.

The Crown demonstrates the story of two of the most renowned addresses in the world that are Buckingham Palace and 10 Downing Street. This show shows how the intrigues, love lives and machinations behind the major happenings shaped the second half of the 20th century. With two houses, two courts and one Crown, this series keeps the viewers captivated. Viewers definitely are waiting for this season eagerly.

This show is based on Julia Quinn’s best-selling series of novels and is the demonstration of the glittering, sexy and competitive world of Regency London high society. From the lavish ballrooms of Mayfair to the aesthetic palaces of Park Lane and many more, this series unravels a sumptuous and seductive world filled with complex rules and regulations and several dramatic struggles related to power. The powerful Bridgerton family that is comprised of eight is the heart of the show. This season will go on air in 2022.

In this series, a former globetrotter Trico now lives a peaceful pasture life in mountains which he feels is not appropriate for him. He is a kind of person who always has an abundance of ideas and stories from his travel experiences to share with his fellow sheep which shakes things up. The new ruckus is at Biscotte’s expense, a rigid ewe whose task is to keep the flock safe. A hard task is with the Wolf lurking around who waits to make the most of this chaos by catching a few sheep. These challenges are overcome by Trico and Biscotte’s and their friendship keeps the Wolf from preying on their sheep. This animated series is set to arrive in 2022 and will keep the children spellbound.

What if someone told you that magic is real and it is just hidden from the public because of lack of awareness on how to ignite it? In this show, Daniel Spellbound knows how and where to find magic .He plays the role of  a tracker of magical ingredients and he  makes his living by selling rare goods to wizards so that they can use them in their spells. The story takes a turn when he discovers an ingredient. When he finds it, Daniel catches the attention of some dangerous alchemists and he is suddenly required to test his skills on an adventure around the globe, while the magical world hangs in the balance!