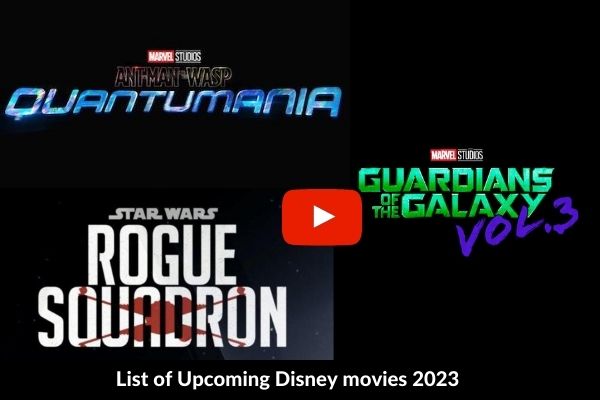 The craze of movies is present in all age group, taking from childhood to adulthood, everyone loves watching movies and when it comes to Disney movies, the craze got multiply n number of times. And in this period of lockdown, every individual is making every night as the movie night as they have plenty of time at night. Disney movies come with all-time entertainment for all as they include classic, animation, Pixar and Disney channel movies also. And the movies to be released on 2023 are to be the most awaiting movies ever as it includes Galaxy of Guardians volume 3, Star Wars: Rogue Squadron, Ant-man and the wasp: Quantumania.

As we already know about the popularity of Marvel movies created from the Marvel comic line. And each movie is a blockbuster hit on the world’s Boxoffice. Coming to the Galaxy of guardian series, volume 1 and volume 2 both were great movies with a combination of Action and entertainment. The performance of Rocket (raccoon) and Groot is fabulous in the entire movie. Now we just can’t wait for its third volume. Marvel Studios has officially announced the release date that is May 5, 2023. Now the cast would not be the same as before in volume 1 and 2 of the series, the reason behind this is the aftermath of the Avengers: Endgame, a lot of things has changed now. Gamora is now alive again in MCU, from the past 2014 timeline, so it might be the scenario that she doesn’t have the memory after that time. Star-Lord/ peter, Drax, mantis, Groot all will be back in one piece after the snap-in Avengers, rejoining the rocket and nebula. But there are also other things coming to the others in this movie. It seems that the guardians picked up a new team member after the aftermath of avengers. Thor “Chris Hemsworth” team up with rocket and others. Now the only wait is what this Disney movie will bring us with, the storyline is not disclosed yet. Some rumours are that the movie will revolve around the search for gamora as she disappeared after the big battle with Thanos. Or it will come up with some new challenges for the new and stronger Guardians. All we can do is that we will have to wait for the trailer to launch and get the idea from that about the movie. But one thing is sure that it would be the best movie from the previous ones as thor is also there.

Star Wars: Rogue Squadron is one of the popular upcoming star wars film, which is planned to be released on Christmas 2023. Like other Disney movies, this one has already fallen into the pit full of entertainment and actions. There are many star war movies already released before, so if you have not watched any of the star war movies, you can simply search for all the previously released and can watch them in series, as the release date is far enough, but the excitement is inversely proportional to it. As the release date comes near, the excitement to watch the movie increases proportionally. This movie will take us to a more exciting and new adventure of space.

Ant-Man and the Wasp: Quantumania

Ant-man and the wasp: Quantumania is also from the popular comic of Marvel studios. This quantum theory in the previous movie helps out in building the main concept of the Avengers: Endgame, to reset all the things and collect all the infinity stones from the past. Only because of the quantum theory, tony met his father in past, the captain completes his last dance with his girlfriend, and others got the chance to live their history and fix things. Now one more time this marvel series is coming with the title of Quantumania. Ant-man and wasp already have the superpower which they use against their rivals. And now they also have the quantum theory to get in the past. The title is looking so exciting, that anyone can just can’t wait to see what we get this time. The release date is out by the marvel studios and is set to be on 17th February 2023. We can also expect the special guest entry of one of the avenger in the movie and the post-credits in marvel movies are also interested.

Super excited to watch these movies in 2023. Don’t forget to tell us which one is your favourite among these.