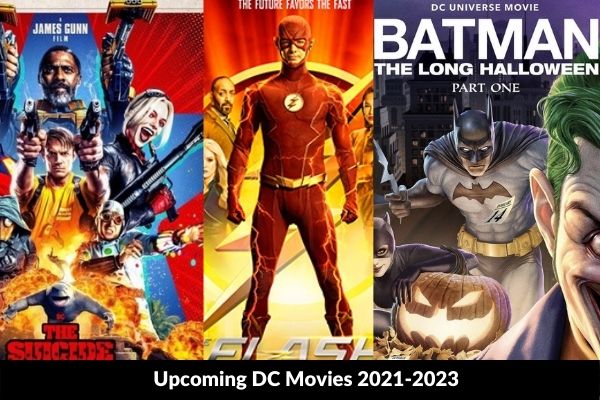 The superhero movie genre is my favorite and if you are on this page then I guess it’s your favorite too! Lately we are deprived of the entertainment that we always get by watching these movies due to the current scenario. But don’t you worry, you are going to taste that amusement again as some of them are going to hit theaters this year too. Here is an extensive list of your favorite DC movies.

The cast has been assembled and it is possible that the film will be introduced in 2023. Till now the details of the movie have been kept low key. So far we know that Sarah Shahi became a part of the cast in October 2019. She will be seen in a role of both a professor and a freedom fighter. Quintessa Swindell and Marwan Kenzari also signed up for the movie but the details about their characters are yet to be made public. Pierce Brosnan will also star in the movie and will play the role of Dr. Fate.

You will see some of your old favorites such as Harley Quinn and Captain Boomerang in this movie. Also, there will be some new faces too (Peacemaker, Bloodsport). A dangerous mission will be carried out by the anti-hero team on the island of Corto Maltese. This movie is ready to be in the theaters on August 6 this year and will be directed by James Gunn and will be starring Margot Robbie, John Cena, Idris Elba,Viola Davis, Joel Kinnaman, Jai Courtney

Shazam: Fury of the Gods

You will have to wait for this awesome movie till June 2, 2023. What we know so far, David F. Sandberg, who will helm this movie, will make a comeback. The first movie in this series was a critical as well as a commercial hit. We do not know much about the plot of the movie. But what we do know is that fans are clearly waiting for Zachary Levi’s childish superhero. However, it is not clear whether this sequel will entertain kids getting older now or will not meet their expectations.

Details about the movie’s story are still vague. The expectations of the batman’s lovers are high. This film will not be a prequel to Ben Affleck’s Batman and will feature a whole new slate of thespians and other characters. The role of Commissioner Gordon will be played by Jeffrey Wright and Colin Farrell will play the role of the Penguin. Other than this, Paul Dano will be seen as Riddler, Zoe Kravitz will feature portraying a  Catwoman and Alfred Pennyworth will be played by Andy Serkis. It will hit the theaters in the first quarter of 2022.

With a release date scheduled in December 2022, this movie will cover its final stages of development in summer 2021. This is certainly one of the most looked forward to DC movies in the Aquaman series.  The script of the movie is written by Wan and David Leslie Johnson-McGoldrick who were also a part of the first movie in the series. The role of Arthur Curry aka Aquaman is reprised by none other than Jason Momoa. Apart from him, Orm (Patrick Wilson), Mera (Amber Heard) and Black Manta (Yahya Abdul-Mateen II) all will return in the sequel as well.

This movie is being filmed currently and is being directed by the Director Andy Muschietti. The movie will feature Michael Keaton, Ezra Miller, Ben Affleck,Sasha Calle and Kiersey Clemons in main roles. This movie was slated to start filming in the first quarter of 2017 but after Miller started working on Fantastic Beasts 2 the studio had to take a break and slow things down. Famuyiwa’s exit also affected the making of the film. In July, 2019, Miller offered a script of the film that was not liked by Warner Bros. Although they kept Miller as the lead character. After all this, the film was finally ready to be filmed in 2020 but the date was pushed further due to lockdown. Sasha Calle will be shown in the role of a super girl.

Various information is uncertain about other DC movies’ characters and their release dates. But the list that we have provided are certain to be paving their ways towards the release date. However, covid’s unpredictable nature can still bring an unwanted pause to the production of our favorite DC movies. We will keep you updated regarding any change. Till then, stay safe and be hopeful to see these upcoming masterstrokes.