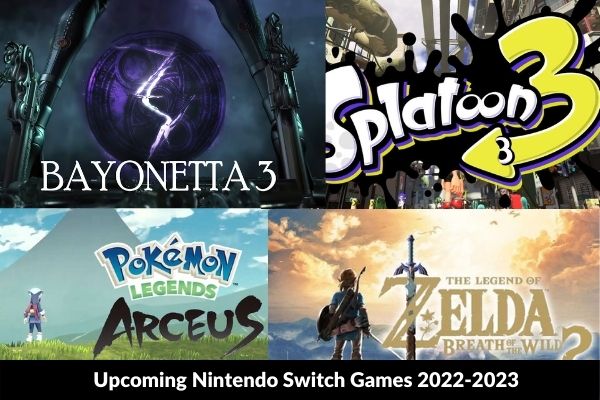 Are you searching for the upcoming nintendo switch games? Well, we have created an intriguing list of the games that are slated to be introduced during 2022-2023. Here’s the list of all the wonderful picks that you can add to your wish list!

Falling under RPG and open-world genre, this game is slated to be released during 2022 (exact date is not confirmed)

There is a reason that this game has taken the community by storm and everybody who has played it, knows it. The Pokemon game is what we have been dreaming of for so long. In this game, players explore a region called Sinnoh with a mission to create a first-ever Pokedex. This game would aim to honor the series along with the introduction of new action and RPG elements. Players will be able to observe and study, and catch Pokemon out in their natural habitat and will sneak up to them. The battles will just be about holding the ball of your ally Pokemon so that it can enter the battle.

This game falls under the action genre and its release date will be confirmed in 2022.

In Splatoon 3, you will see the player leaving Inkopolis behind and then venturing out into a new region known as the Splatlands. Here, a new city called Splatsville, aka the ‘City of Chaos’ is where the battle will take place.This game will be introducing new features to your regular splat-tastic multiplayer action and will include a bow and other fresh customisation options. Also,some enhanced movement abilities will also be shown in this game . We are eagerly waiting for its arrival in 2022.

Project Triangle Strategy is a brand new Square Enix tactical RPG. The battles in this game will take place on multi-elevation terrain. In this game, pre-planning will be the key as the character attacks will be defined by their location and equipped weapons. Apart from this, the decisions you rely on will affect how the story unfolds and also will impact on which characters will join your cause. It may be released in mid-2022.

Imagine that you are a journalist who has just shifted from New York to a small British town called Rainy Woods to pay off a huge debt. To solve your money-related troubles, you start taking pictures of all of the incidents that are happening in the town and carry out reports. But, there is something strange!  Rainy Woods is not an ordinary place and suddenly the inhabitants of the “happiest town” can turn into animals such as cats and dogs. Yes, the story of this game sounds wonderful as well as bizarre, it seems like one of the very interesting indie games heading to the Switch line-up this year.

Baldo is a brand new concoction of action and adventure falling under the RPG genre. The release date is not yet confirmed but allegedly, it will come out in 2022. This game follows the story of Baldo, the ‘pure child’ of prophecy who travels through the world of Rodia. We do not have much information about it, so far we know that it will be an open-world adventurous game filled with intriguing characters and weird and wonderful creatures. You may also need to solve puzzles in this game.

Beware! The Witch is back and this time she is coming exclusively to the Nintendo Switch. It’s currently in development at PlatinumGames and that is all we know about this game so far. In the teaser trailer you can see magic, bullets, and above features, bullets and Bayonetta herself. Stay tuned until we get the next update!

Legend of Zelda: Breath of the Wild sequel

To be very honest, we are still thinking about how Nintendo’s E3 2019 ended. The announcement that was made at the end of the game about the Breath of the Wild getting a direct sequel was not predicted. No doubt the excitement of the users was legitimate and palpable. But sadly, there is still a pretty long time to go till we get to play it. People have been assuming the possibility of being able to play as either Zelda or Link and we hope that game allows us for this. Other than this, if we get any more updates, you will be notified.