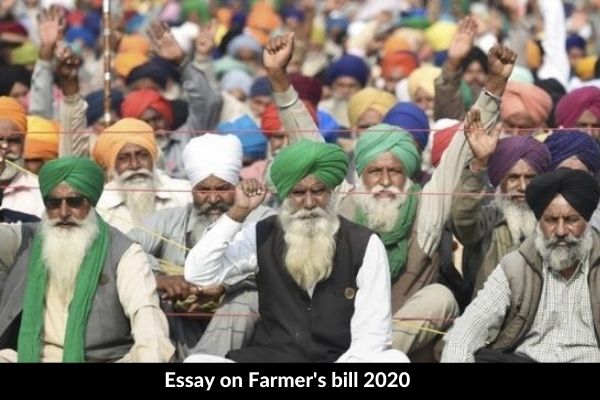 India is a democratic country where everything is done on a mutual understanding between the government and with the people indirectly. And to run such a vast country there have to be certain rules and regulations. The rules and regulations are mentioned in the constitution and when there is a need to add a new rule; it has to pass through all the parliament houses where it’s in form of a bill.

What is a bill?

A bill is introduced legislation under debate by a legislature. A bill will not become law till it is enacted by the parliament and, on most occasions, signed by the president. When a bill has been signed into law, it is considered an act of the parliament, or legislation. Bills are brought into the legislature, where they are debated, analyzed, and agreed on.

What is a farmer’s bill?

For the farmers of India, the government passed three bills together collectively called the farmers’ bill. The three bills are the Farmers’ Produce Trade and Commerce (Promotion and Facilitation) Act of 2020, Farmers (Empowerment and Protection) Agreement of Price Assurance, Farm Services Act of 2020, and Essential Commodities (Amendment) Act of 2020. These were introduced in the monsoon session of the parliament on 23rd September 2020.

The controversial bills, which finally came into the act after the signature of the president on 27th September 2020, sparked outrage among opposition major parties and farmer groups. Despite the fierce opposition, some people gave their full consent to the bills, with some claiming that they would “emancipate” the agricultural workforce. Now to break all the confusions or the curiosity of people here is a brief description of the three bills:

This act permits farmers to exchange their farm goods even outside the spot shops established under the laws of different state Agricultural Produce Marketing Committees (APMC acts). The ‘APMC Bypass Bill,’ the name of the bill, would circumvent all state government APMC actions.

The legislation aims to provide a platform for farmers to participate in contract farming, in which farmers step into a direct deal with a buyer (before sowing season) to offer their product to them at the prices decided at the time of the deal.

This act, which amends the Essential Commodities Act of 1955, aims to limit the government’s control over the output, supply, and sale of certain primary products.

Despite the total clarity, there is a lot of chaos going around the country as the data is breached into pieces and spread out in public with half explanation. So before assuming anything, people should go through all the details provided by the government; the pros and cons, and then be it in favor or against this bill.