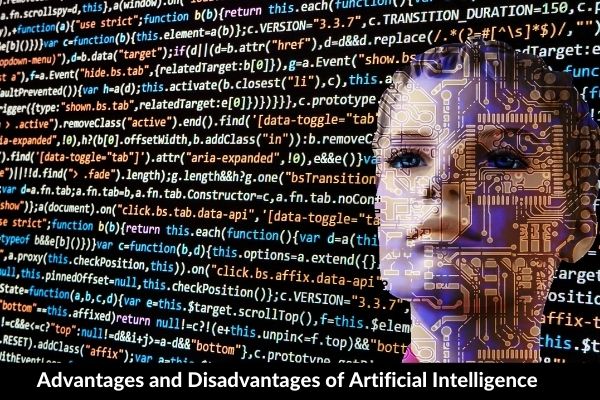 Artificial intelligence is a computerized system that imitates human thought processes and performs similar tasks as a human does. Therefore, everything can be named as Artificial Intelligence if it includes any program doing something that we would generally think would rely on the cognitive skills of a human. This is a concept used to ease human life and it has been around for quite a long time in the IT industry. You can also call it an evolved discipline of computer science.

But guess what? This highly efficient technology is not only equipped with advantages but also with several disadvantages too. Let us look at some of the benefits and drawbacks.

The repetitive work we humans had to do earlier is now the responsibility of the efficient AI technology. For example, sending a thank you letter, analyzing certain documents to spot errors and many other jobs that humans consider “boring” have now been entitled to AI. Moreover, with the help of AI, the productivity of humans can be channelized in some other important tasks and AI can do all the boring yet extremely significant work with a great speed.

Humans can make mistakes but the technology that mimics the human’s intellect does not, provided it is programmed properly. The reason is, AI collects the enormous data from the past and on the basis of that information, it applies its algorithms. Therefore, a greater degree of precision is seen in the work done by AI.

AI does not get worn out

Take an example of robots. Intense laborious tasks with extra hard work can be performed by them and that too with greater responsibility. For example, Artificial Intelligence and the science of robotics is utilised in mining and many other fuel exploration procedures. These complex machines assist humans to explore the ocean floor and help us to expand our horizons.

Humans are the ocean of emotions which is not at all a bad thing, but when it hampers the decision making capability, efficiency and productivity get severely affected. Right program decisions can be taken if they are worked upon rationally. AI, for example, robots, think logically hence they are always productive.

An extraordinary performance can be expected from AI when it comes to working with high volumes of data that humans are not able to handle. Not only does AI technology acquire and extract the data at an amazing pace, but it also interprets it and transforms it leaving it errors free.

Setting up an AI-based system entails enormous costs given the complexity of engineering that goes into building one. Apart from this, the huge expenditure doesn’t stop there as repair and maintenance also cost thousands of dollars. You would be astonished if you get to know about the cost that Apple had to invest to acquire its virtual assistant SIRI,? Let me tell you, a whopping $200 million. Not only this, Amazon acquired Alexa for $26 million in 2013.

AI threatens the job possibilities for humans. AI is a complete automation that directly bothers the labour market. For example, in big warehouses, robots have been deployed in place of humans. Though it facilitates human work, the possibilities of creating millions of jobs have reduced.

It is true that AI is a logical decision taker but when it comes to abstract thinking, it is humans that have to be relied upon, not the machines. So when it comes to generating ideas and then exploring those ideas logically, humans work beautifully as the human brain can be non-linear in the way it functions.

If AI reaches a significant advanced stage, it may pose a great ethical threat for humanity. This is another human component that is hard to inculcate inside a machine.  Artificial Intelligence can assist the enterprises with cutting down the time taken to complete a repetitive assignment, however, the idea of assuming that a machine should follow ethical values is as vague as drawing portraits on water.

Since with the help of AI, humans do not have to do complex work and do not have to memorize things, their brain remains in a nonfunctional mode for long and does not get the required cognitive exercise.  The total reliance and addiction to AI can cause problems to cognitive development of future generations.